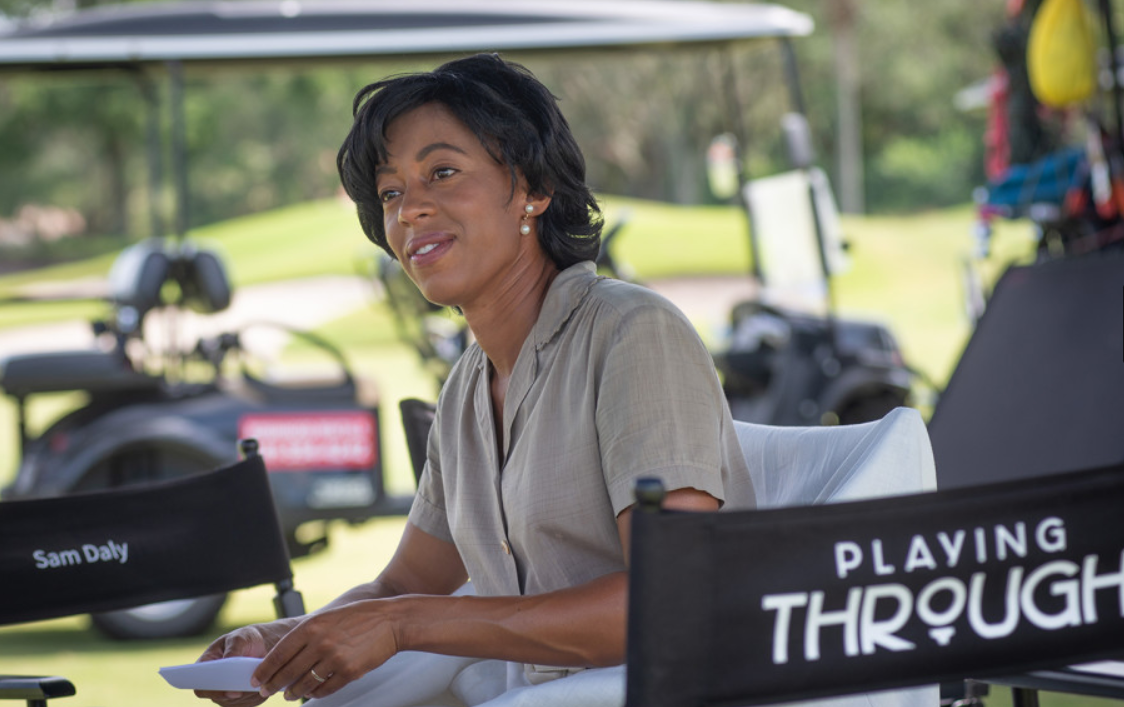 It’s a balmy Tuesday afternoon in May, and on the greens of Sarasota’s Laurel Oak Country Club, a sea of people straight out of the 1950s—women in knee-length skirts and tucked-in, starchy shirts; men in flat caps and vests—have descended onto the golf course.

They’re watching a pivotal golf match between a Black woman and a white woman—at a time when both weren’t exactly encouraged to play golf. But actually, that’s not the whole story. The spectators are really there as actors in Playing Through, a new film being shot in Sarasota.

Playing Through sits at the intersection of humanity, sports and history. The story follows a tumultuous game between Ann Gregory, the first Black woman to play in a U.S. Golf Association event, and the fictional Babs Whatling, a talented golfer and white woman from the South. The tale flips between the game being played on the course and illuminating flashbacks.

The script is personal for writer Curtis Jordan, a former rowing coach at Princeton University who now lives much of the year in Sarasota. His own mother was the inspiration for Whatling. She started in the horse business but took up golf as an avenue to prove herself once she married Jordan’s father. A real-life golf match between Jordan’s mother and Gregory proved fateful—afterwards, she divorced Jordan’s father, became one of the first women harness horse drivers and gave up serious golf.

In 2016, after he retired, Jordan started toying with the script. Despite how close he was to one of the main characters, he drew largely from his imagination.

“My mom was a pusher of barriers and adventurous and she was over the top with her life, and she would let you know about it,” he says. “But she never talked about this. I don’t think it was a very bright light in her life.”

But it wasn’t just his mother he kept coming back to—it was Gregory, too.

“When I found out about Ann Gregory, I thought, why don’t I know more about this woman? Why isn’t she more celebrated for her courage and bravery and the things that she did?” Jordan recalls. “That was the driving factor for me to write this.”

It was through a twist of fate that Jordan met filmmaker and Playing Through’s lead producer Peter Odiorne. Jordan and Odiorne’s father both happened to find themselves at a bar in Princeton, New Jersey, one night when they realized they shared something interesting in common: a love for Sarasota.

When Jordan finished his script, his wife gave it to Odiorne’s father. He passed it along to his son, who decided it was right up his alley.

That was almost 19 months ago, but the road to filming is never easy. In the course of development, Odiorne wondered which was harder: finding actors who could be athletes or athletes who could be actors. After developing the project with high-profile actors taking golf lessons, the team decided to try another route. Their two leads, Andia Winslow as Ann Gregory and Julia Rae as Babs Whatling, now have both acting and athletic experience.

Odiorne, director Balbinka Korzeniowska and the Playing Through team decided to shoot the entire film in Sarasota in a five-week time frame ending in mid-June. In addition to Laurel Oak Country Club, locations include Historic Spanish Point, the Waffle Stop restaurant and a few houses in the Rosemary District.

And although the story isn’t personal for Odiorne, the setting is. He came to Sarasota for the first time when his mother was pregnant with him. He’s visited every year since, but this is his first project filmed here.

Even the film crew has local connections. A dozen or so Ringling College of Art and Design students are on staff, and at least one supporting actor is from Westcoast Black Theatre Troupe.

Where the film will go next remains to be seen. The $1-$2 million project is being shot on spec, meaning there’s currently no distribution plan. Two sales agencies are “anxious” to see the film when it’s finished, Odiorne says, and they could take the product and sell it to a prominent distributor, like Hulu, Netflix or A24. If that doesn’t work, there are other avenues.

Whatever happens, Odiorne wants to return to Sarasota. He’s working on a project about John Ringling, one of the city’s most prominent historical figures. And he has hopes of bringing even more films to the area.