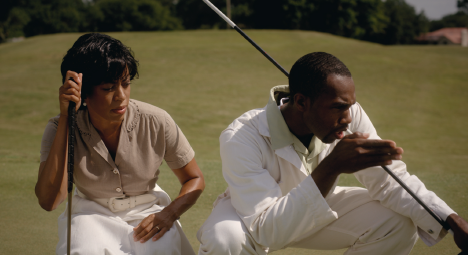 Shared from WSNN  |  Written By Annette Gutierrez
A Sarasota’s golf course is transformed into a movie set to help tell the story of a little-known sports figure of the 50s. SNN talks to the writer and talent who made it come to life.
"Sarasota really became not even an option but almost a requirement for us because of the assets that are here," ‘Playing Through’ Executive Producer and Writer Curtis Jordan said.

The green golf course of Laurel Oak Country Club, the budding talent from the Ringling College of Art and Design,  and the skilled performers of the West Coast Black Theatre Troupe all made the movie ‘Playing Through." It's a film set in the ’50s about Ann Gregory, the first African American golfer to play in the USGA tournament.

"I’ve known about Ann when I was little and started playing golf when I was 10,"‘ Playing Through’ actress Andia Winslow said.

Winslow plays Ann Gregory. After decades of pondering, and five years of pen to paper, Sarasota resident, Curtis Jordan finally made his story, come to life, writing it based on local ties that went beyond the setting.

Cast and crew helped Jordan with his first film.

So, Winslow and other cast members dissected the dialogue getting the film up to par.

"We looked at the intersection of race, class, gender in the ’50s and how that translates to today and what we’re dealing with as women today," Winslow said.

Gregory’s pivotal role in history added pressure to the talent.

"A lot of prep work, I felt like helped me take on the burden of honoring this story," ‘Playing Through’ actress who plays 'Babs Whatling' Jules Rae said.

"I didn’t want to mess it up, but I realized I had to put that aside to not lead with fear but lead with kind of a hope to have generations of people who don’t know about Ann Gregory, to acknowledge her, celebrate her and amplify her story in her message and in her path," Winslow said.

Knowing this role resonates with people who lived through these times, Winslow says it’s important for people to know …

"I think black bodies were only used for labor, but the people busted through saying 'No, we can actually reclaim our bodies and our time, and enjoy to be happy and to be free,'" Winslow said. "I’m a product of Ann Gregory."