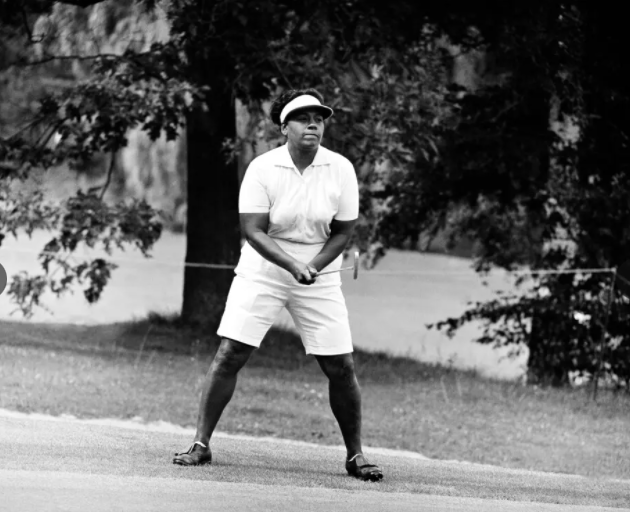 A film sharing the story of Black golfer Ann Gregory, who made history late in her career as the first woman of color to play in a U.S. Golf Association event, can be streamed virtually as part of the Sarasota Film Festival through Sunday.

The movie "Playing Through" has numerous local ties. Gregory's primary competition in the film, the fictional Babs Whiting, is inspired by the mother of Sarasota's Curtis Jordan, who wrote the screenplay.

Many cast and crew members working on the film are also affiliated with the Westcoast Black Theatre Troupe and Ringling College of Art + Design.

Jordan first learned about Gregory in 1991, when he read a Sports Illustrated article about the amateur golfer, who had died a year earlier.

Throughout her life, she won more than 300 golf tournaments, according to the IndyStar. This includes four United Golfers Association national women's championships and competitions in Puerto Rico, the Bahamas, Jamaica and Spain.

The Sports Illustrated story mentioned Gregory's historic USGA event, a real-life match that she played against the screenwriter's mother, Josephine Knowlton Jordan, in 1959. His mother played golf "very successfully" in the 1950s before moving into harness horse racing for the remainder of her career, Curtis Jordan told Patch. Before this article, though, he never knew about Gregory's groundbreaking match against his mother.

"My mom wasn't particularly forthcoming," he said. "I don't think it was a very pleasant match and I think race had something to do with it. So, she didn't talk much about it. I know how much my mom's life changed pretty much after that match."

Jordan couldn't get Gregory's story out of his head, often thinking about it after he read the article until he retired in 2016. Though he wasn't a writer, he wanted to tell her story and began writing the script that would become "Playing Through."

"I was playing with her story, writing it, but I had no idea what I was doing. I had never been a writer. A long email was the longest I've ever written," he said. "I probably had 200 different versions of the script."

He didn't think much about what he might do with the story until he befriended Peter Odiorne, who was interested in producing the film through his company, Unbounded Media. As plans for the film moved forward, they brought in actress and professional golfer Andia Winslow to portray Gregory, as well as director Balbinka Korzeniowska.

With a small budget and other partners brought on through Odiorne, they decided to film locally in Sarasota. It made sense to film in a city with such a thriving arts scene, said Jordan. "I love Sarasota. I love the performing arts here. Coming out of COVID and with all the industries in the world that suffered during COVID, the performing arts were hit hard. I thought it was a great way to give a little back."

In addition to working with Ringling College and Westcoast Black Theatre Troupe, the Sarasota Opera House provided housing for performers and crew.

And much of the movie was filmed at Laurel Oaks Country Club in Sarasota, though the actual match that inspired the screenplay was played at the Congressional Country Club in the Washington, D.C., area.

Though the story is fictional, it relies heavily on real-life events. And when creating Whiting, the movie's antagonist portrayed by Julia Rae, Jordan used his mother "as a skeleton to hang all these bad attributes and also the positive parts of her life onto this character."

He added, "Like all things, there was a level of exaggeration to the character. I saw a lot of what went on with my mom and it's blown up with the Babs character. My mom was a very independent person. She didn't really give a rat's (expletive) about what people thought about her."

Race issues drive the story, said Jordan, though he always considered that to be "the low-hanging fruit" when discussing Gregory's historic athletic feats.

"But we couldn't get away from it," he said. "To me, it was more about individuals wanting to be self-expressed, wanting to be who they wanted to be, regardless of the environment around them and people telling them who to be."

Whiting's character "is less a racist and more a self-centered individual" who was driven to succeed and focused on her own career, he added. "The fact that Ann was Black didn't really bother her. It only bothered her in that it created issues for the competition. She was a competitor and wanted to win at all costs."

Nate Jacobs, the founding and artistic director of Westcoast Black Theatre Troupe who cast many of the African American actors for the movie and also had a small role in the film, said Gregory's is a "very important story" to share.

Calling the golfer "a trailblazer," he said that she was competing "at a time when Black people were not allowed on certain golf courses and not allowed to compete in certain tournaments."

Jacobs told Patch, "We stand on her shoulders. Not only was she always a very dignified and respected woman in all aspects, but she set a precedent in the field of golf, which was pretty much a man's sport anyway, whether you were a white woman or a Black woman."

Founding an all-Black theater in a predominantly white city decades after Gregory was golfing, he can still relate to her story today.

"We're still dealing with the same stuff we've been dealing with for centuries in this country," said Jacobs.

When Westcoast Black Theatre Troupe started, there had never been an all-Black cast in any theater performance in Sarasota. Though the theater is now embraced by many in the city, it wasn't always easy, he said.

"We endured the Ann Gregory stuff, too. They were trying to keep us out of the theaters. Called us (racial slurs) in our face in our early days in this town. Just some nasty, uncalled for craziness that we had to endure to build what we have here," said Jacobs. "So, we are proud to be a part of telling her story. It's a story that needed to be told and it's a collaboration that fell smack dab in the middle of our core values."

Many members of the film's cast and crew didn't know much about Gregory before making the film. Like many of them, Michael Mendez, a Westcoast regular who portrayed the golfer's caddy, Reggie, said he's glad he had the opportunity to learn about her life.

"Those questions run through your mind. Who's the first person that did this or that? There's so many people that get lost in history because there's not enough attention given to them," he said. "I didn't know much about Ms. Ann Gregory, but I'm definitely glad that I was part of this project. Not only was this story a valuable story that should be told to everybody, but her being played by a phenomenal golfer and a Black woman herself (Winslow) was a direct inspiration."

The film has all the makings of a future classic movie, said Mendez. "It's one of those movies like growing up in the '90s that's like a classic, almost like 'Remember the Titans' or something like that, like other phenomenal sports movies we know of that are classics."

Jordan hopes the film resonates with viewers, as "it has a lot of humanity to it without the superheroes and special effects."

He said, "It's not a complicated movie, but I think it's a really good story. It's like a restaurant that's not a very fancy restaurant. There's no big splash, but the food's really good. It's kind of like that."